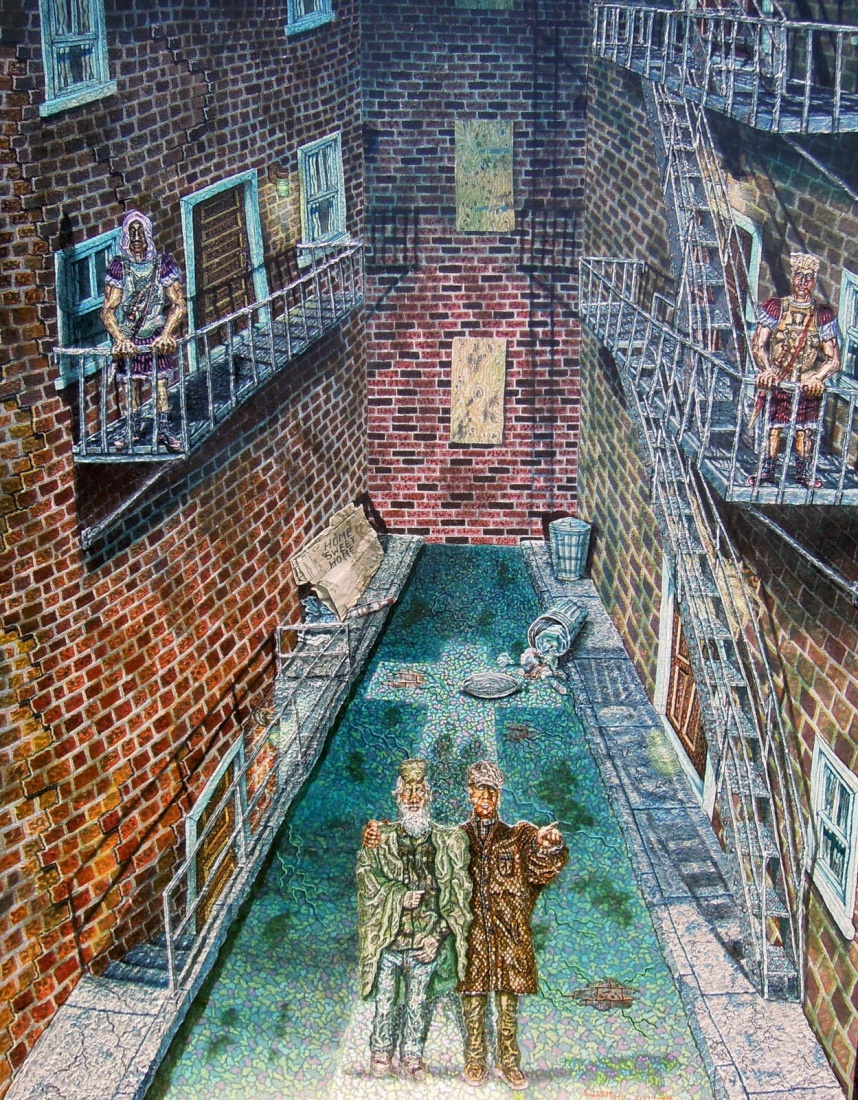 Acrylic on Canvas Size :48"x68" Year finished: 2004-14 This painting illustrates three witness who are taking part in the salvation of a homeless person. the figure in the background are angles, this imposed by them being Positioned on second floor balconies,symbolizing they are not humans,they are a higher class of beings. To the left side of the painting a demon and to the right side an angel of God . the kingdoms they serve are identified by the breast plate emblems of their armor. The demon has a dragon head overlaid on a pentagram. The angle of God has a lions head overlaid on a cross. The demon face is partly hidden by a hood which represents deception,where in contrast the angle of God is wearing nothing on his head that hiders the view of his face., representing honest. Angel are always involved with the affairs of the human race. Demon are warring against man to turn their heart against God ,and lead them to destruction. God's angel are always warring lead mankind to salvation through Jesus the Christ, and lead him away from the path of destruction that comes from sinful living. The ally way is representing three kingdoms,to the left,the kingdom o Hell. The center road,the kingdom of man kind. To the wright side ,the kingdom of Heaven. The path of these kingdom are represented by the direction of stairs . To go the way of Hell is to take the stairs down to the sub-level door. To the go the way of heaven is to take the fire escape upward. The lighting and the condition of the structures of the walls also identify the nature of the kingdoms they represent. The kingdom of Hell is represented by the dark and crumbling wall. Man's kingdom is represented by a boarded up windowed wall that is a dead end. Symbolizing that mankind only has two roads to chose from,there is no such thing a s a third realety. The left side of the paint is a cardboard box and a news paper floor which serve as a make sift shelter for the homeless man. The turned over bottle reveals which devise he had that lead him to a life of living in the street. The tipped over trash can which spills it's trash onto the light source that is lighting the alley way,which is in the shape of a cross,represent mankind's sin which Jesus The Christ paid in full the dept which God demand for the payment for sin which is death. So that The guiltless took the place of the guilty, that by faith in this truth all will escape Hell and enter the Kingdom of God as children and heirs of The Most High God. The Homeless man ,who is dirty,ill clothed,cold,tired,hungry,hopeless, symbolizes the condition of Mankind out size a flourishing relationship with God. The Christian witness is better dressed implying he is walk with God,and his life is blessed through God provision. The witness is showing compassion and the the love of Christ to this homeless man by wrapping his arm around the shoulder of the dirty smelly homeless man. He is point the homeless man in the direction of the path that lead to salvation through faith in the work of Jesus The Christ which is His work on the Cross,receive Jesus as his Lord and Savior.. That through a relation ship with the Christ, He can receive the guidance, the strength,the will power to leave his old life of being a drunkard and living in the street. Because in Christ old thing pass away ,and all thing are made new. The light that falls on the christian witness and the homeless man and opens up in the shape of the cross in the alley way,comes from a heavenly source out side the picture. Written by Stephen J.Vatttimo June 16, 2014