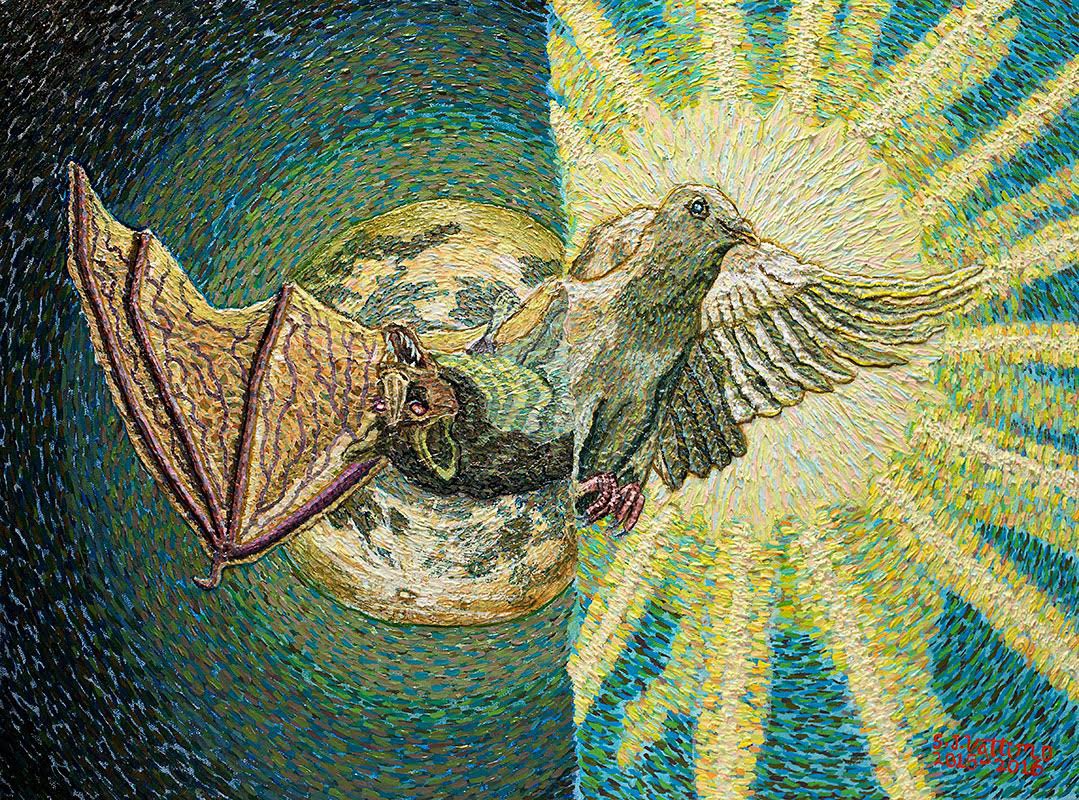 Medium: Acrylic On Canvas Size: 26" x 34" Style: Symbolism,Surreal,impressionistic . Subject: Dove,Sun,-Bat,Moon Date of Work : Nov 2015 -Sept 19,2016 This painting started out as a pumpkin design for the Chads Ford Pa. Historical Society's Great pumpkin Carve. Which I have been participating in for the last nine years. What inspired me to turn the design into a lasting paining was it's message that it communicates seem to echo louder and louder as each day passes. The dove in the painting is always used in mankind's history to represent, hope , peace,the symbol of The Holy Spirit. The sun in the Bible is call the greater light that govern the day. So I used dove and the sun to represent the spiritual force of the Heavenly kingdom that is seen and unseen in our world. The bat Is know as a creature of the night,Thought to be a fowl creature that people fear. The moon in the Bible is called the lesser light that is created to govern the night,to give light on to the earth at night. Night time is mentioned in the Bible as when men do their evil deed. Be for man invented methods to light the street and people homes, people limited their activity at night,do to absence of light. People with superstitious beliefs believe that demonic creature dwelt in the shadow and would attack them if they step out the light. Another historical fact is bandits would hide in the dark and rob night travelers. People also worked while it was day light,then party,get drunk,sleep around at night. The Bible mentions those who reject God's messiah do not come into the light then their deeds be exposed, So I choose to use the bat and the moon to symbolize the dark evil kingdom of the fallen angels. The reason why two creature converge in the middle is because man kind is the center piece that both sides are contesting for. Man kind in the beginning was created as a holy creation. But just as Satan decided he was going to ex halt himself above His creator , he went to the rest of the angel to get them to join his army to dethrone God. When Satan and his army lost the battle for the Heavenly Kingdom, He turn his eyes to conquering the Earthly realm by temping man kind who God gifted the deed of the earth to. The devil possess a snake to hold a conversation with man to deceive them into to distrust God and lead them to disobey the commandment from God not to eat from The Three Of The Knowledge Of Good And Evil. This how man became the middle battle ground. God's force battling to restore man kind back to fellowship with God and regain their citizenship in God's eternal Kingdom. Satan and his army of fallen angels work on deceiving,afflicting, and destroying man kind ,in hope to take as many as his army can drag to the eternal lake of fire ,where God will throw ever one who has denounced Him as their God and king. Written by Stephen J. Vattimo Sept 18,2016