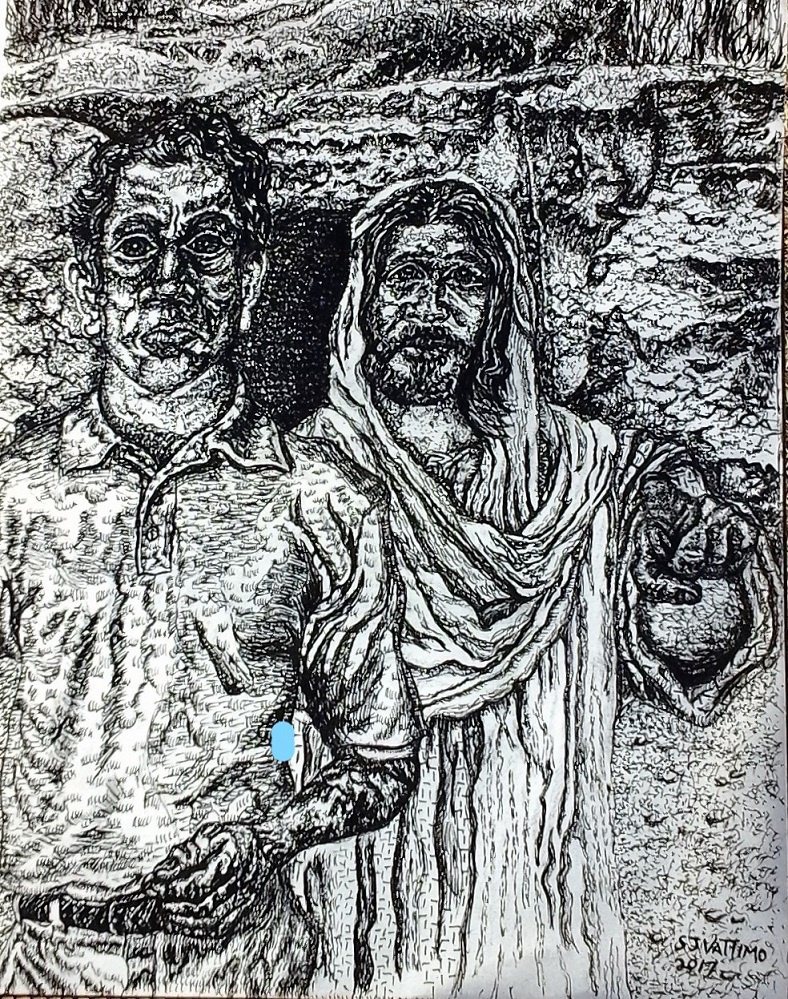 11"x 14" Ink on Sketch book paper study by Stephen J. Vattimo 2/18/2017 This ink study is of a Jesus giving direction to a new convert to Christianity , in witch path to take in life. They are standing out side the open tomb, where Jesus was buried for three day after His death through crucifixion . He was hand to the roman to be put to death for speaking blasphemy,for Claim to be the Messiah. God had raid Jesus from the dead as His sign of excepting Jesus's death for the payment for the sin that separates man from the fellowship with God. So what separates a man from the kingdom of God ,and places them under the judgement of be thrown in to the lake of fire is not sin,but rejection of the free gift of eternal life through salvation through the God only son,Jesus of Nazareth. Theo a person is save as soon as they trust in Jesus for the payment for their sins,they still live in a fallen world , and need to rely on Him for Guidance,strength,daily bread,protection. For this a Christian will face many trials and tribulation,for we have an advisory the Devil,who at the cross was defeated, so he goes around now like an old lion who,s teeth and claws are no long sharp, who has become a man eater ,because he has lost his power and strength to go after other prey. But be of go cheer God is preparing a new world were sin,death,and the Devil and his army of fallen angel and rebellious faithless members of man kind will not have palace. Once again There will be no more space of air between God and his that will separate them. Written by Stephen J. Vattimo 2/18/2017 Written by Stephen J. Vattimo