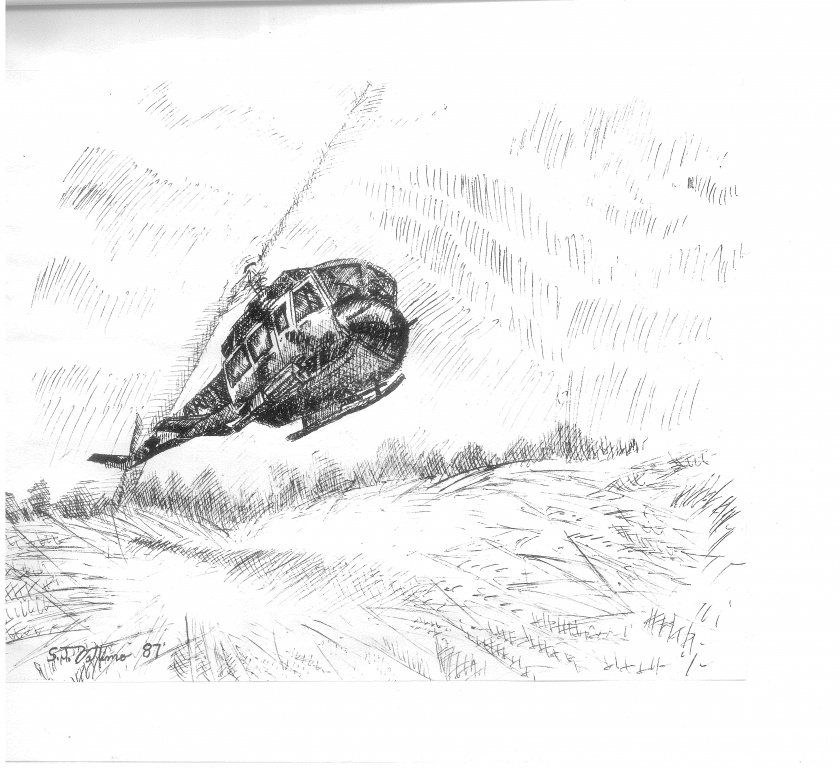 Medium : Pen and Ink Size : 11'' x 15'' Year completed: 1987 This rendering is part of a body of artwork I did while I was in the Military, entitled ," The Army Years". One of my most exciting ride on a helicopter , was when I was serving in the U.S. Air force- Civil Air Patrol, we were helping the National Guard to figure out the fastest flight paths between hospitals, for future Air transportation of patients. So while we were making a trial run, I was strapped in a side seat, with the door locked open, we flew parallel to the ground, the experience was awesome . One of the things I loved about Civil Air Patrol was doing a lot of flying. I served 9 years in the U.S. Army, during my 9 year of my service,I was a Combat Engineer, Anti tank Toe Missile Crewman, Combat Medic. I spent a lot of time in the field, and one thing that is important to the support of ground forces, is the pilots who fly the helicopters , for the helicopter delivers supplies, the mail, transport troops, air lifts wounded soldiers off the battlefield to the hospitals. This is why I entitled this illustration, " Support Is On The Way. " Written by Stephen J. Vattimo

other graphics: Self Portriat, Humble Thy Self In The Sight Of The Lord, Her Gift, Living Water, Support Is On The Way, The Vision Of The Four Beasts Bear, Thou Shall Not Steal, Victory Through Prayer, Sower And The Seed, The King Who Conquered Death, Pardoned Not Paroled, Salvation In A Storm, Decision, The Creation Cries Out, Medium : Acrylic on canvas Size : 4' x 5' Year completed 2002 I painted this illustration to publicly proclaim The Biblical account of a six literal day creation by the holy trinity, to be The true account of the origin of all t, In The Beginning There Were Three,